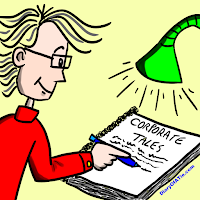 That day he had to build three power point presentations. He was late, his itchy skin was not allowing him to concentrate. Worse, he was itchy right there in his private parts. As he couldn't stand anymore, he called a dermatologist, scheduled for the same day and drove fast to the appointment.

The doctor was an old lady already. After a few initial questions, she took her magnifying glass to examine him. Serious?! Yeah... She didn't hesitate. It was embarrassing for him indeed. After looking very closely at his private parts, she got to a conclusion: - "allergy"! Take this medicine every time you feel like scratching.

He came back home thinking... Never had any allergy, what would be the cause? His smartphone vibrated. He received a text message from the office asking about the power point presentations that were still to be finished. Immediately, he felt like scratching. He laughed*. So much work to do and he was literally scratching his private parts. It was clear for him now. He had power point allergy.


*In Brazil, when someone is neither working nor doing anything useful, they say the person is "scratching his private parts". It's an expression widely used in the country, in Portuguese of course.
Posted by Adriano Bello at 8:30 PM

ABOUT DIARY OF A TIE

Work is extremely important for all of us, not only because of the money, but also to fullfill our needs of recognition, belonging and growth. We spend substantial part of our time working. It's true that we are pushed to tough situations and to relationships that are not always easy. But we also make good friends and laugh a lot. Work makes us think over the world and learn deeper about ourselves. Why not face professional challenges more smoothly? That's what Diary of a Tie is about.